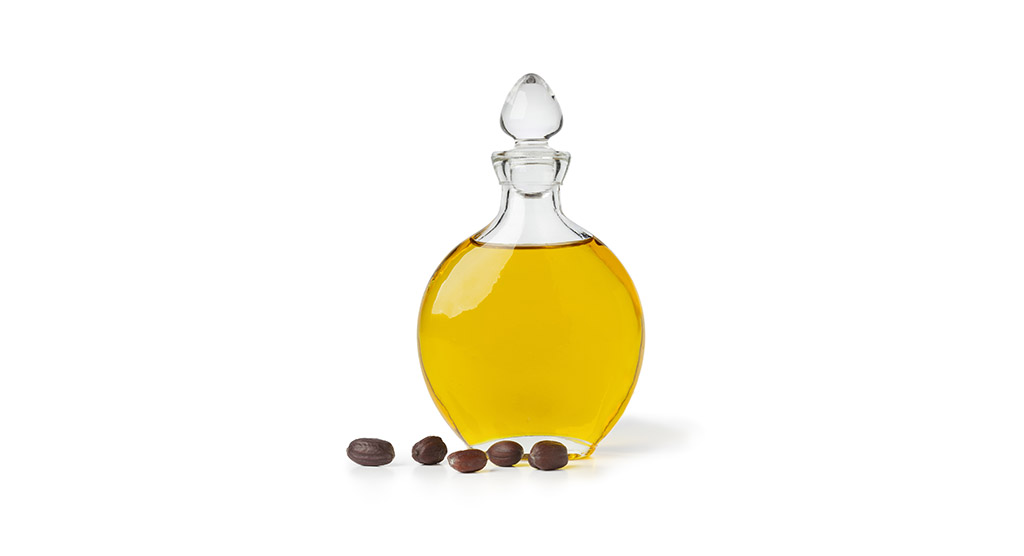 WHAT: Jojoba (Simmondsia chinensis) is a plant indigenous to the southwestern United States that goes by many names, including goat nut, quinine nut, pignut, and wild hazel. It is most famous for its oil, which is a liquid wax harvested from the seed. People have been using jojoba oil for centuries for myriad medicinal and cosmetic purposes. Grown in the Sonoran, Colorado, and Baja California deserts, the jojoba plant is immediately recognizable by its waxy leaves and yellow flowers, which bloom from March to May. Its mild scent is “fixative,” or taking on the scent of its immediate environment.

ORIGIN: The jojoba plant only thrives naturally in arid desert areas of Colorado, Arizona, California and Northern Mexico. While the flowers only bloom for a few months each year, the leaves do not shed with the seasons. When planted as a seed, a jojoba plant can take up to three years to start bearing flowers. The waxy leaves of the jojoba plant have an aerodynamic effect that sends pollen from the male flower to the female flower. Once pollinated, a female flower becomes a hard capsule that contains one or more seeds. As it grows, the capsule splits open, revealing a mature jojoba seed. While the jojoba seed grows in the wild in the desert, farms exist all over North America, Israel, Argentina, Peru, and Australia.

HISTORY: The oil from a jojoba seed has a storied history. Used for both medicinal and cosmetic purposes, the jojoba seed has been a mainstay in American culture for centuries. Native Americans have been on the forefront of jojoba oil use, as Jesuit Missionaries in the 18th century documented them heating the mature seed to soften them. Once heated, they used a mortar and pestle to grind the seed into a butter oil, which they applied to their hair and skin for conditioning. The Tohono O’odham people native to the Sonoran desert used jojoba seeds to make an antioxidant paste to soothe burns. Modern science can now explain jojoba’s colorful history: Chemists have found jojoba to be rich in tocopherols, or strains of Vitamin E. This antioxidant has been used to soothe and heal damaged and sensitive skin for a long time.

Interestingly, one of the reasons for jojoba’s increased popularity in the 20th century has ties to whaling. Oil from the sperm whale had a variety of uses, from fueling lamps to personal care products. Once whaling was outlawed, jojoba farming began in earnest, as Americans began to recognize the seeds as a more sustainable and humane alternative to whale oil.

HEALTH BENEFITS: Today, people use jojoba oil throughout the world for an array of health conditions. People use it most commonly to treat acne, psoriasis, sunburns, and chapped skin. People who are afflicted with hair loss also use jojoba oil, as it’s said to encourage hair growth.

One of the reasons jojoba oil is so effective at healing skin is because its chemistry mimics our own. To stay hydrated, our skin produces a waxy substance known as sebum. Our body produces less sebum as we age, leading to chapped, dry skin. Jojoba oil creates the same effect as sebum, moisturizing tired skin. In fact, jojoba oil is a key ingredient in synthetic sebum used to treat patients with serious medical conditions. On the other hand, too much sebum leads to buildup and acne. Jojoba oil has a cleansing effect, restoring the skin’s natural balance. This makes it a desirable treatment for both eczema and acne.

People are sometimes hesitant to try jojoba oil because of the word “oil.” This is a misnomer – jojoba oil is non-comedogenic, meaning it won’t clog pores. Jojoba is a rich source of iodine, which stymies the growth of harmful bacteria that can lead to breakouts. Jojoba can even hasten the process of wound healing. According to a study by the Department of Environment at the University of Italy, jojoba oil can speed wound closure and stimulate collagen synthesis.

An additional study from Germany in 2012 examined the substance’s ability to treat skin lesions and improve skin condition in 194 subjects, who applied a mask of clay and jojoba oil to their faces between two and three times a week. At the end of the six-week study period, 54 percent of the study participants noticed marked improvement.

#1:  Facial Cleanser and Moisturizer: As an emollient, jojoba oil protects skin from scaly patches and treats rough irritated skin. It also functions as a natural antibacterial substance. Its gentle formulation makes it perfect for the delicate skin of the face.

#2:  Body Moisturizer: Unlike some other substances, jojoba oil is perfect for full body application. Those with sensitive, easily irritated skin will be relieved to find it has no harsh chemicals.

#3:  Makeup Remover: Jojoba oil is effective in removing daily buildup, makeup, and bacteria. Since it’s hypoallergenic, you can even use it on the delicate skin around the eyes.

#4:  Scalp and Body Massage Oil: Jojoba oil will moisturize all body surfaces, including your hair. Its mild scent makes it a perfect choice for massage oil, especially for those with sensitive noses. B vitamins encourage softness and shine. A study from University of Maryland Medical Center discovered that massaging the scalp with a variety of essential oils, including Jojoba, can stimulate hair growth.

#5:  Lip Conditioner and Moisturizer: The oil from the jojoba plant acts as a natural moisturizer, protectant, and emollient, without the harsh chemicals found in traditional lip remedies.

STUDIES: The emollient properties of jojoba oil are well documented. A 2008 study in the Journal of Cosmetic Dermatology found jojoba oil to have a long-lasting moisturizing effect. Subjects applied a topical formulation of jojoba oil mixed with glycerol. Eight and 24-hour benchmarks found the jojoba oil/glycerol blend was more effective in retaining moisture than glycerol alone.

Jojoba oil is also effective at protecting and healing hair that has been subject to harsh chemical treatments. A study examining the effects of jojoba oil esters on Afro-ethnic hair that had been chemically straightened found subjects who treated with jojoba oil experienced less protein loss and more protection from breakage.

An Italian literature review found a robust body of research suggesting jojoba oil plays an important role in wound healing, aging, and fighting skin infections. Its anti-inflammatory properties make it ideal for sunscreens and moisturizers, according to the review.

TOXICITY & PRECAUTIONS: Jojoba oil is becoming an increasingly popular choice for skin and hair care because of its natural personal care properties. It is hypoallergenic and well tolerated by those with sensitive skin, and by people who are prone to breakouts. Experts consider jojoba oil safe for most users. It is a topical emollient and people should not ingest it.

Speak to your healthcare practitioner about using jojoba oil if you have specific health concerns. Patients who have severe psoriasis, eczema, or acne should speak with their physicians before making any changes to their treatment regimen. Although rare, contact dermatitis can occur. In the event of a skin reaction, discontinue use immediately. The EWG’s (The Environmental Working Group) Skin Deep Cosmetic Database safety ranks the ingredient jojoba oil in the “green zone”, with an overall toxicity ranking of 1 out of 10.